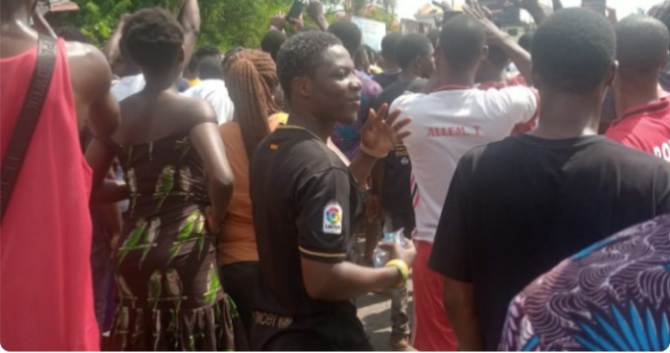 The June 12 protesters had earlier converged at Mokola Roundabout to call for the resignation of President Muhammadu Buhari.

They chanted songs and brandished placards that had inscriptions such as ‘Buhari must go’, ‘where is the light?’, end bad governance’, ‘Buhari is our problem’, among others.

From Mokola Roundabout, the protesters marched to the state secretariat at the Agodi area of Ibadan.

While the protest was going on hitch-free, the Yoruba Nation agitators arrived at the state secretariat to join them.

As they mixed with the June 12 protesters, they started chanting “we want Yoruba nation”, which immediately resulted in a disagreement.

Oloninran Gbenga, one of the June 12 protesters, told TheCable that their goal was to demand good governance and fix the country.

“We are here today for the June 12 protest to register our grievances against the state of the nation, virtually every Nigerian is aware that Nigeria is in shambles,” he said.

“In a country where there is no security, no employment, no job for the youth, practically nothing is working, the education sector is in shambles, what we are having now is increment of tuition fee, even the health sector is an eyesore and that is why we have trooped out against these anomalies.”

In contrast, one of the Yoruba agitators who refused to disclose his name told TheCable that they no longer believe in one Nigeria.

“Those who believe in one Nigeria do no know what they are doing. At this point, with the look of things, I don’t believe some people will still be protesting for good governance anymore,” he said.

“This is Yorubaland and what we want now is our sovereignty. We don’t want any governance, either good or bad, from the government anymore.”

When the disagreement between both groups escalated, it caught the attention of the security operatives who stepped in to prevent violence from erupting.

After the security operatives quelled the face-off, the June 12 protesters angrily marched off with complaints that their rally had been hijacked.

Shortly after, the Yoruba Nation agitators also left the venue after their number had considerably reduced.