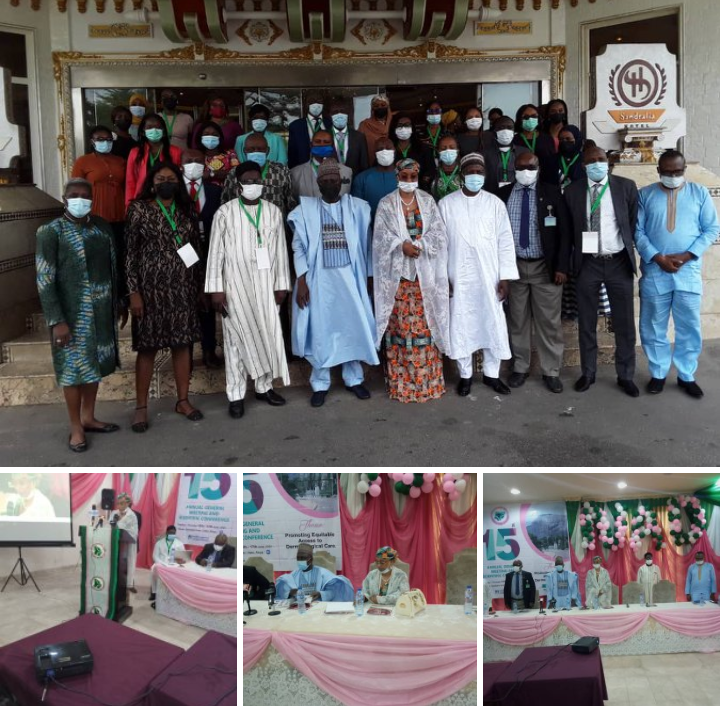 It is a first move in the country, that however met with stiff resistance by some indigenes who could be thinking that it would be too close to where they would want to lobby for the establishment of Federal Medical Centre, also against Binani’s earlier, rather popular proposal.

NAD could have seen an ideology rather than idiotic, strategic, constructive foresight rather than cluelessness and supportive lawmaker they are to help in realising her dream, their objective, which if realised, such development would be translated across the geopolitical zones of the country.

NAD, has therefore, found it worthy to honour who, one of the key members would describe as simply a paragon, considered by some as amiably amazing amazon and by critical thinker as personification of achievement, Sen Binani, to chair the 2021 Annual General Meeting and Scientific Conference of the association in Abuja, with the theme: Promoting Equitable Access to Dermatological Care.

It was and honour, the paragon, the amiably amazing amazon clearly held in high esteem, .

According to Binani, “I chaired the 15th Annual General Meeting and Scientific Conference of National Association of Dermatologists today, Tuesday, June 15, in Abuja.

“It was a great opportunity of meeting seasoned dermatologists across the country as we push for the realization of the Establishment of the first Government Dermatology Hospital in Garkida, Adamawa state.

“I thank the association for recognising my modest contribution in promoting dermatology care delivery and practice in Nigeria”.

In her opening remarks as the chairman of the occation, Binani is agreed that access to high-quality healthcare remains a pressing global issue, which is more critical in developing countries like Nigeria, where traditional barriers to quality healthcare are complicated by inadequate medical infrastructure and shortage of providers, whereby millions of people suffer and die from conditions for which effective interventions appears to be a mirage simply because of lack of access to needed care and resources.

“It is in realisation of the importance of improved access to quality healthcare that I became particularly interested in taking healthcare delivery to the doorsteps of our people very early in my political career.

“As a member representing Yola North, Yola South and Girei Federal Constituency in the 7th National Assembly, I did a Needs Assessment and found the most pressing healthcare needs of women and girls.

“I built, furnished and equipped a 17-bed maternity clinic at Luru, Tambo ward.

“I imported and supplied 20 number of new Incubators to Specialist hospital Yola and the Federal Medical Centre, Yola where the equipment was in dire need.

“I sponsored a number of medical outreach programmes, namely; treatment of Vesicovaginal fistula (VVF), treatment of fibrosis, catarrach surgeries and breast cancer screening within my constituency and beyond.

“The response was overwhelming as several hundreds responded. This further spurred me in having greater interest in health related issues and Laws,” Binani said.

Binani has also revealed her legislative achievements within two years as a Senator of the Federal Republic of Nigeria, where she said he has “sponsored four health related bills in the Senate with the goal of giving priority to accelerating health coverage in my Senatorial District in particular, Adamawa State and the Nation in general. They are:

“For the proposed National Dermatology Specialist Hospital specifically, the Bill seeks to address the current situation where Nigeria a country of over 200 million people does not have a tertiary Health Hospital dedicated to dermatological issues and training, hence my motivation to table such a bill.

“Garkida provides a good foundation for such, given its antecedents, recognition and contribution in the field of dermatology.

“By way of conclusion, I want to emphasise that our governments at all levels should give priority attention to the treatment of dermatological issues and training of the needed personnel.

“Distinguished Ladies and Gentlemen, the theme of this Conference is timely and apt and could not have come at a better time. I wish you fruitful deliberations.

“Thank you all for listening”.