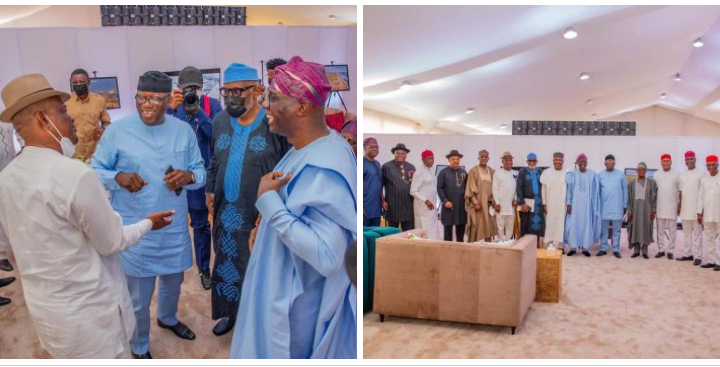 The Southern Nigerian Governors, under the umbrella of Southern Governors’ Forum, SGF, have dished out what was considered as embarrassing; warning all security agencies in the country against operating in the region; to address insecurity by arresting insurgents under the guise of separatists, without obtaining permission from the governor of the particular state as contained in a communiqué read by Governor Rotimi of Ondo State shortly after their closed-door meeting in Lagos on Monday.

The public response to the distasteful communique sought to know whether or not the governors were in support of Sunday Igboho’s criminal activities against the state.

Some citizens have advanced the argument to inviting the governors to hand over the criminal on the run, probably undercover in a government house, to the relevant security agency.

The governors also insisted that the next president of the country must emerge from the southern region as much as the Igbos are aggressive in their agitation for the presidency to be rotated to the east, come 2023. What a rotational democracy!

The communique has equally reincarnated the rather staled open grazing issue, enough to serve as a proselytising herdsmen hate theology.

Wale OlaOluwa’s deconstruction of the southern governor’s communique is worth reproducing as can be read below:

It is so unfortunate that Southern governors have nothing concrete, tangible and progressive to discuss except to be rigmarolling on the stale, expired and uninspiring narrative of open grazing, rotational presidency, etc. Everyone knows open grazing is outdated; so why flogging it again as if that is the only problem confronting the south.

Anyway to start with on their call for the 2023 presidency, some governors and opinion leaders in the North have been voicing this as far back as last year that, the next president should come from the South! That is a done deal already. It is sacrosanct, logical and undebatable.

Now by this their rudderless meeting, the Southern governors have given themselves away as a bunch of directionless cowards and fearful people who always see themselves as victims, rather than as equals with the North; who should be talking and discussing on the strength of negotiations for political gains. Why are they pressing panic buttons?

So sad.
Even if they had just dwelt on the demand for State Police alone, it would have made sense than their bogus, cowardly communique.

How I wish they all agreed to build rail (as Lagos is doing; and Kano is planning to too) to interconnect with their capitals – which will be different from FG’s rail endeavour. How I wish they discuss agric synergy that can secure food in all the states. And many more.

The Southern governors meeting was a distress on our national psyche by voicing the issue of grazing banning again! That doesn’t need a communique; all that is needed is go ahead and get it passed by their state assembly as a law – simple!

Bringing it to national consciousness again is stoking the ember of hatred against a tribe perceived to be their nemeses all the time.

At this time in our nation when tension is high, we don’t need that unthoughtful public statement, all to justify they “doing something to defend” the interest of their people. Nigeria is bleeding, and need to heal. Reckless political statements that portray “us against them”, will do no one any good. But it will only hurt and divide us more and more.

Yes…there are challenges presently, but they are not insurmountable. Leadership is about giving people hope, even where there is hopelessness. It is instigating positive spirit among people to garner their energy for positive thought and actions.
God bless Nigeria.