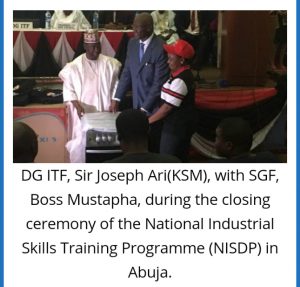 Impressed by the activities of the Industrial Training Fund (ITF), the Federal Government said that it would continue to support the training of Nigerians, particularly, the youths in acquiring vocational training and skills acquisition.

Nigeria’s Vice-President, Professor Osinbajo said this on Thursday at the closing ceremony of the National Industrial Skills Development Programme (NISDP) where more than 11, 000 youth were equipped with start-up packs by Industrial Training Fund (ITF).

Osinbajo said the Federal Government would do all that would be necessary to ensure that the capacities of Nigerian youth are developed and fully utilised.

Represented by the Secretary to the Federal Government (SGF), Mr. Boss Mustapha, Osibanjo said one of the greatest challenges government grappled with was how to harness the great potentials of the Nigerian youths.

Osinbajo commended ITF for training over 400, 000 Nigerian youths on various vocational skills and empowering them with lifelong opportunities.

The vice president called for greater synergy between federal government agencies like ITF and National Directorate of Employment (NDE) in the skills acquisition programmes, adding that government would like to encourage all the comatose Ministries, Departments and Agencies (MDAs) to wake up and emulate ITF.

In his address, the Director General of the Industrial Training Fund ( ITF) Sir Joseph Ari said that the President Muhammadu Buhari administration have supported ITF in the training of hundreds of thousands of Nigerian youths in various skills or trades in order to fend for themselves.

According to the ITF’s director general, the commitment and dedication of the current government towards tackling unemployment and reducing poverty has spurred the ITF to higher levels of achievements leading to several initiatives including the National Industrial Skills Development Programme (NISDP), pointing out that ITF would continue to prepare Nigerian youths with skills for employability and entrepreneurship.

Ari said participants were trained in welding and fabrication, plumbing and pipe-fitting, tailoring, aluminum, tiling, Plaster of Paris (POP) installation as well as photography, amongst others.

According to him, the fund monitoring and evaluation template, indicated that where training occured without the accompanying empowerment tools, the results become less impactful, saying bearing such in mind that ITF decided to empower all beneficiaries of its skills acquisition programmes with start-up kits.

“Surveys have revealed that in all cases where the trainees were provided with the kits, more than 90 percent earned reasonable livelihood as entrepreneurs.

“It is our conviction that training the youth and women without equipping them, defeats the core objective of the programme and the policy of the present administration to create wealth and grow the economy,’’ he said.

Ari said that the fund had put in place some skills in order to fill the skills gaps identified by the ITF and United Nations Industrial Development Organisation (UNIDO) Survey.

Ari said the fund’s targeted for 2019 was to equip Nigerians with lifelong skills in the agriculture, construction, transport and services sectors that were identified by the survey to have great potential for job creation.

On his part, the Chairman Senate Committee on Trade and Industries Dr. Samuel Egwu, lauded ITF, saying that “ITF, which was established by the act of the National Assembly has met its expectations”.

Egwu called on the Federal Government to liaise with the Central Bank of Nigeria (CBN) to henceforth give the trainees between N1m to N5m to establish the trade the acquired.