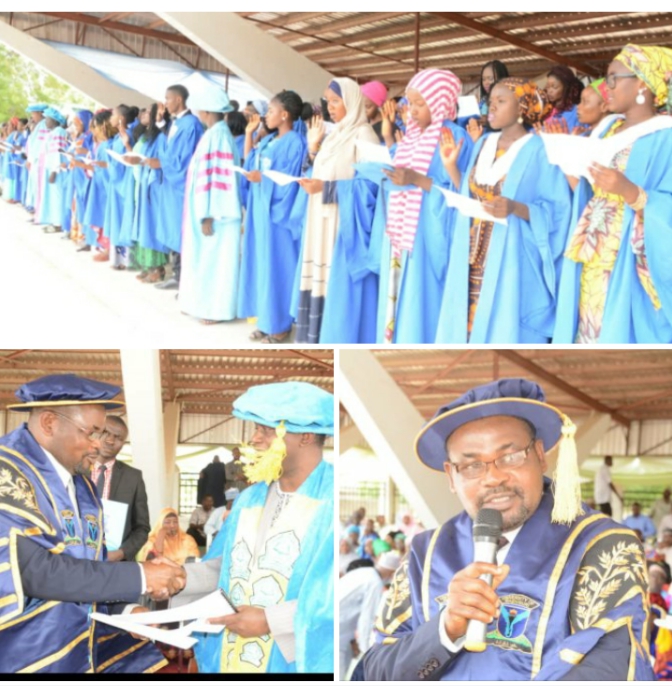 The Federal College of Education (FCE) Yola, in affiliation with the University of Maiduguri Friday, matriculated 470, 5th set of students into its degree programme for the 2018/2019, academic session.

This is contained in a statement signed by Bashiru Abdullahi the Senior Public Relations Officer of the institution.

In his address during the ceremony held at the convocation square of FCE Yola, the Vice Chancellor, University of Maiduguri, Professor Ibrahim Abubakar Njodi congratulated the matriculants and admonished them to be lawabiding and hardworking during their stay in the College.

Prof. Njodi, reiterated the commitment of the University towards continued support for the degree programme in FCE Yola and other affiliated colleges in the country in line with the vision of bringing degree in education to the door step of every Nigerian.

Njodi further commended the management of FCE Yola for a job welldone in running the degree programme affectively and urged the college to sustain the tempo for the overall development of education in the nation.

Earlier in his welcome address, the Provost of college Prof. Abdul-Mumin Sa’ad, disclosed that the FCE Yola has secured full accreditation status for seven out of the nine degree programmes being run in affiliation with the University of Maiduguri.

Sa’ad also pointed out that the ongoing reconstruction of four major roads and several drainages in the College through the federal government ecological fund was a major step taken to tackle the problems of flooding within the campus.

The Provost expressed appreciation to the Federal Government for the ecological fund intervention and disclosed that plans for fencing the college and female hostel blocks were almost being concluded.

In their goodwill messages, the Acting President of American University of Nigeria, Professor Muhammadu Kha and representative of the Vice – Chancellor, Modibbo Adama University of Technology, Yola, Professor Shehu Iya, urged the matriculants to be of good conduct during their studies.

In a vote of thanks on behalf of the matriculants, Henry Ibrahim from English Department, expressed appreciation to the University of Maiduguri for finding them worthy of admission and promised that they would exhibit good virtues in the course of their studies.

Highlights of the event were oath taking by the matriculants as administered by the Registrar, University of Maiduguri, represented by Mr. Filibus Mshelia and presentation of gift to the Provost of FCE Yola by the Acting President American University of Nigeria.