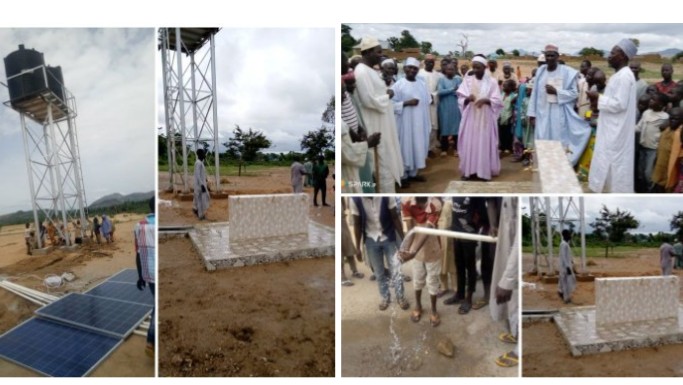 Today marks the World Humanitarian Day. In tune with the Day, the Periscope crew left Jalingo-Maiha District with the report of an impostor who is restrained by a court order from parading himself as district head; attending a security meeting, assuming a district headship portfolio, alleged to be invited by the interim chairman of Maiha local government, who ignored the rule of law. The content and the context of the coordinated crime, could simply be considered, as Crusoe could coin, “to be containing complecency to conspiracy in contempt of court” and headed for Jaba-Jaba, a village under Mbilla District of Maiha local government area, Adamawa state, northeast Nigeria.

The Jaba-Jaba community has for so long been crying for clean, hygienic water against cholera, against typhoid and against other waterborne, among other diseases, with a view to being in touch with humanity from any window associated with philanthropy in tune with what would be obtained on Humanitarian Day, everyday, the whole year repeatedly, where the native Bindow as a senator and then a governor, failed woefully.

It would have been a long legacy of the previous government, to a community coming out to battle with devastation occasioned by the Boko Haram insurgency.

However, in Maiha local government, the previous state government was alleged to have taken pride in planting the seed of discord by distorting history, leaving a story of dissension, intended for anarchy in a peaceful community with an established monarchy traceable from the Bn Fodio zeitgeist.

Today, the Jaba-Jaba community, feels a sense of humanity and with humility, devoid of any humiliation, celebrates the World Humanitarian Day, having had a solar panels typed borehole, donated by a Canada based Dr. Ibrahim Muhammad Dodo, making the list of the Dodo family’s apolitical community services, as social responsibility.

The Jaba-Jaba donated community borehole, was commissioned by the District Head (Lamdo) Mbilla Alhaji Shehu Abubakar Suleiman in company of the ES and Ardo Jaba-Jaba with the members of the ES community, gracing the occasion.

In his remarks, Lamdo Mbilla, while appreciating, commended Dr. Dodo for the philanthropic gesture, which he said was rooted in the Dodo family.

The District Head urged the Jaba-Jaba community to express gratitude by maintaining the borehole as they enjoy the use for which it should be utilised.

“The Dodo family has been making a lot of impact in Maiha and beyond; Dr. Ibrahim Dodo has built and is funding elementary school not far from here; he has donated state of the art hospital facilities in some hospitals in Adamawa among other states for which Maiha cottage hospital has been a beneficiary.

“Dr. Ibrahim Dodo has for some years, prior to the Boko Haram insurgency, been organising free healthcare services in rural communities across the state and beyond, where he invited medical personnel from abroad to join the indigenous health professionals for the medical mission, which included major surgeries.

“Dr. Ibrahim Dodo’s brothers who are based in the UK, equally facilitated medical missions from abroad; these include distribution of educational facilities and books to be able to make teacher-student participatory classroom exercise in addition to making the library functional for our children to have the spirit of school in abroad, while in their local locations,” an elder based in Maiha Gari who simply told me his name was Usman would reveal.

Bello a middle aged who could be considered as a local political analyst, has categorised two groups of people in Maiha local government: the progressive and the retrogressive.

The progressive, Bello would explain, are for the most part, academically sound, current in philanthropic gesture but are politically introverts. They mostly join public service.

The retrogressive, Bello would explain, are for the most part, the direct opposite. He attributed the crisis associated with the monarchy in Maiha to the political extroverts, the retrogressive group.

“Maiha could get out of the maze when the progressive group bulldozes into politics.

“An attempt was however courageously made by a member in the progressive category; Dr. Abdullahi Dauda Belel, after a lot of pressure by the electorates in Maiha; tasking him for a representational assignment at the upper chamber of the National Assembly.

“Dr. Belel would appear to be a threat to the retrogressive guys, he was technically, denied ticket right from the political party primaries that was never to be conducted.

“It was however a good attempt; a solid foundation for the 2023,” Bello would say.