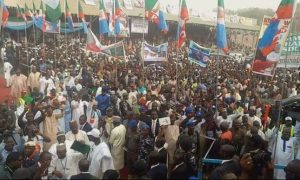 The flag off of governor Muhammadu Umaru Jibrill Bindow’s gubernatorial campaign was marred by low turnout amidst failure of a large section of party stalwarts to grace the event.

In order to boost attendance to the event, the governor had three days to the occasion, mobilized a number of top Nollywood and Kannywood actors and actresses as well as Hausa musicians to the occasion.

Investigation by this medium indicated that, as a strategy of mass public mobilization, the government has invited a handful of Nollywood, Kannywood actors and actresses as well as top Hausa musicians to the event in order to attract a massive crowd. The invitation has cost the state tax payers money running into tens of Millions of naira.

But despite such huge expenditure, the turnout seemingly did not impress the visiting national chairman of the party, Adams Oshiomhole who during his speech indicated that only a fraction of the congregation were in the arena as more than twice the number were outside as a way of reassuring the people that APC is firmly rooted in the state.

Some youths interviewed at the venue say they attended the ceremony not necessarily because they were enthusiastic Bindow supporters but as a way to catch a glimpse of their favourite superstars.

A Kannywood fan who identify herself simply as Rabi, said she graced the event to have a one on one contact with her screen idols, like Ali Nuhu, Kumurchi and the others.

Newshawk has also observed that mainstream APC stakeholders in the state including those that aspired for the ticket of the party alongside Bindow were conspicuously absent at the flag off campaign further indicating that the raging and intractable internal party impasse was yet over.

One of the leading party stalwarts and Buhari’s Inlaw, Dr. Mahmud Halilu Ahmed, also known as Modi, is currently putting strenuous efforts to supplant the governor through judicial process following allegations of certificate forgery against Bindow. The legal battle which was transferred to Yola is billed to commence today being Wednesday.