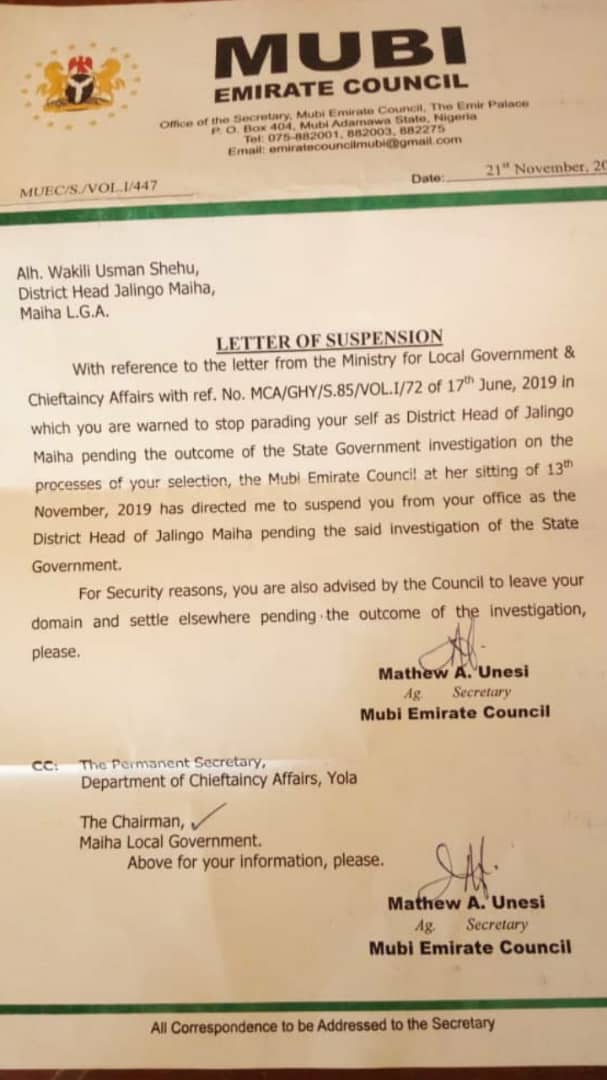 The Mubi Emirate Council has on November 21, 2019, suspended Wakili Usman Shehu, popularly known as Idi the for Governor Bindow appointed, from parading himself as District Head of Jalingo-Maiha, Maiha local government area, northern senatorial zone of Adamawa state, northeast Nigeria, pending the outcome of the state government investigation on the process of the selection that led to his appointment.

The suspension was sequel to the directives given by the present Governor Ahmadu Umaru Fintiri of Adamawa State who said that justice, law and court order must be honoured rather than flaunted.

The suspension letter would have been served to Idi in June 2019. However, whether due to complacency to conspiracy or owing to administrative inefficiency and/or both, the letter meant for the Mubi Emirate Council, from the Adamawa State ministry of local government and chieftaincy affairs, was said to be erroneously channelled through the District Head of Jalingo-Maiha District, where it was suspected to be hijacked, perhaps, in connivance with the Emirate insider, compliant to the conspiracy against an established Monarchy.

About two years ago, the Mubi Emirate Council has submitted the name of Barr. Mahmud Abubakar Suleiman the heir to Ubandoma, to the Adamawa State Governor- it was then Bindow- for approval of appointment as the legitimate Distinct Head of Jalingo-Maiha District.

Contravening the monarchical order, former Governor Bindow of Adamawa State, alleged to want to open a window for anarchy instigating dissention, appointed an unpopular, not even close in genealogy to the mornarcy in Jalingo-Maiha; a scheme it was claimed, being weaved for about 35 years, waiting for Bindow’s implementation.

The people of Maiha conceived the act as an attack on not only their heritage but moral sensibility; the arrogant use of power to coerce an opportunistic alien on the peace loving community; a possibility in politics with a constitutionally endorsed citizenship by birth but never to be permitted in the realm of the legitimately birthright monarchy; especially in Maiha, therefore, have collectively supported the idea of challenging the traditional, moral and spiritual shortchange by Bindow with his suffocating window before the law.

Mubi Emirate Council, particularly, the Emir of Mubi, was said to be subjected to threat and denial by the Bindow led government that warned that it would have him dethroned should he failed to vote for the APC candidate rejected by the electorates in 2019.

These have adversely affected the Council’s selections of District Heads of Michika and Jalingo-Maiha, among other nauseating interferences.

A Yola High Court, in its ruling, decided for due process; restrained Idi the Bindow appointed, from parading himself as District Head of Jalingo-Maiha and ordered the Adamawa State Governor- to approve the appointment of Barr. Mahmud Abubakar Suleiman as the legitimate District Head.

Bindow would not honour the court order, until after he might have left leadership. So long as he was the governor, the grand scale impunity on the side of Idi, parading himself as District Head, threatening fire and brimstone against the natives, remained sacrosanct a sanctity, which, in the eyes of the fetish, could be sacrilegious otherwise.

Based on this, when interviewed, a native sage in Maiha, revealed his projection- as the Periscope has duly reported that Bindow would not succeed himself; he would suffer a humiliating defeat, Idi the Bindow appointment and anointed impostor, would end up in prison and the stool would remain where it belonged; accommodating only the heir to the throne.

“Those who initially thought the sage was a mere dotard, considered his thoughts and wisdom as nothing other than a figment of imagination, a fermented permutation of impossibility that Bindow a Governor- can’t be fought and be won against- are left if not worn out, at least to relate a retailed fantasy; not fermented story about the projection, whether or not it was possible for David to defeat Goliath; going back to spiritual history, as we move on, bringing an impostor down to his knees worst than the prodigal child and Bindow remains a physical history in political Adamawa, only to be remembered as a governor the second that hated Maiha after Juta,” A man of wisdom would reveal to the Periscope reporter in Maiha.

It came to pass. Bindow was eventually humiliatingly defeated at the poll as the sage projected. Idi was left struggling to live with the Bindow’s digital divide; dishonouring Fintiri’s victory as he disobeyed court order that the election was rigged, therefore, Bindow would comeback to crown him king whether or not it would please the Mubi Emirate Council and the real monarchs in Maiha.

Idi’s arrogance and fetish beliefs led to the translation of the second sage’s projection; degenerated to being a tenant in prison.

The highjacked rather seeming abducted letter to the Mubi Emirate Council was said to be eventually freely released from the hands of the conspirators; no ransom, because the Monarchy in Maiha would remain never to be negotiated with impostor, backed by those in complacency to conspiracy.

Having been monarchically suspended and ejected, rejected and dejected even by the court jesters, a close confidant in conspiracy against the monarchy to the impostor, on condition of anonymity, revealed that Idi would register his grievance before the public complaint commission referred to as ombudsman in Yola.

Idi was looking for a lead, for a guide who must have known who to talk to, heading the public complaint commission, as he was technically and creatively incapable of independence.

Who would Idi drag to ombudsman! The policemen, the natives of Jalingi-Maiha, the Mubi Emirate Council, the Yola High Court whose judgement he has since challenged before the court of appeal or governor Fintiri of Adamawa State who challenged injustice against the Monarchy in Jalingo-Maiha and/or all of the above?

The Mubi Emirate Council has communicated to Idi his suspension letter and banishment from Maiha as directed by the Adamawa State governor. The letter dated November 21, 2019 reads thus:

With reference to the letter from the Ministry of Local Government & Chieftaincy Affairs, with ref. No. MCA/GHY/S.85/VOL.1/72 of 17th June, 2019, in which you are warned to stop parading yourself as District Head of Jalingo-Maiha pending the outcome of the state government investigation on the process of your selection, the Mubi Emirate Council at her sitting of 13th November, 2019 has directed me to suspend you from your office as the District Head of Jalingo-Maiha pending the said investigation of the state government.

For security reasons, you are also advised by the Council to leave your domain and settle elsewhere pending the outcome of the investigation, please.