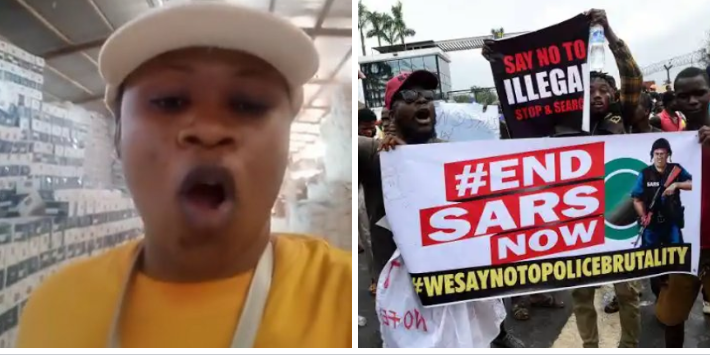 * How did the hoodlums break into the public storehouse rather unchallenged?
* Was the storehouse not adequately guarded by security men?
* Were the security men overwhelmed?
* Why didn’t the overpowered security men, should there be, raise an alarm?
* Did they raise any alarm but was not responded?
* Was it simply a stage-managed thin?

The trending videos across the country that make the Periscope Mood of the Moment, is the vestiges of savagery in the name of revolt associated with #EndSARS protests turned riots, typical of anarchy that would not #EndPMB.

The youth who claimed to be cleansing the state of alleged security excesses, other corruption indices for good governance, hypocritically turned out to be claimed by the very system they sought for a concrete review.

Lagos was the worst hit, the vandals razed down public facilities, broke into warehouses and food stores and looted what were considered as food items meant for the Covid-19 palliative they were being denied to enjoy.

The northern part of the country whose clerics and clergies have worked hard to suppress the #EndSARS protesters turned riotous would not be totally free from the fists of the hoodlums as they feast on the government warehouses and storehouses, to translate the script to looting reality worse than the alleged SARS brutality.

The hoodlums visited government’s storehouses in Kaduna, Jos Plateau, Jalingo Taraba among other states likes Tsunami of disaster, before descending into Yola Adamawa state to desecrate the peace with their fist to feast on the looted food commodity on a Sunday when part of the citizens were in commune with the Creator by means of devotion at worship centres.

When some of the other part of the citizens have taken the off days to learn more and to do that which could strengthen the understanding of the faith they assiduously professed.

Recall that the good youth of Adamawa, having realised how the #EndSARS protests degenerated into riots breeding anarchy in other states, stood firmly to protect the state by suppressing the somewhat porous protest.

It is now apparent how the protest would have turned out to be if allowed with the looting if the public storehouse.

Hndreds of seeming hungry but certainly uncritical thinking angry residents broke into a public storehouse located at Kwanarwaya, near Sangere, along Numan road in Adamawa ntate, northeast Nigeria to loot what they considered as Covid-19 palliatives meant for them but horded to deny them

In a trending video, a woman in yellow T-shirt was heard calling on residents to visit the for their share of the looted booty.

The call was massively responded by the irate, rather irresponsible youths as another video shared, captured hundreds of people joining in the looting feast.

The Police Public Relations Officer, Adamawa State Police Command, DSP Sulaiman Yahaya Nguroje has confirmed the incident where he said that the team of police, changed to maintain law and order werr on their way to the scene of the incident.

“We have heard that hundreds of people have gathered and are looting food stuff at a storage facility in Kwanarwaya.

”We have mobilised policemen and are on our way to the scene in order to restore peace and order in the area.

“I will get back to you after we are through with the operation,” Nguroje said.

Nigeria is currently witnessing an upsurge of attacks on public buildings, warehouses and storehouses by hoodlums who are out to loot, considered as negative legacy of the #EndSARS protests.

The IGP, Mohammed Adamu has on Saturday issued a stern warning against looters of public property, saying that the police would henceforth not condone such acts of breach promising a clampdown on perpetrators.

The questions that are remained to be asked are; how did the hoodlums break into the storehouse rather unchallenged?
Was the storehouse not adequately guarded by security men?
Were the security men overwhelmed?
Why didn’t the overpowered security men, should there be, not raise an alarm?
* Did they raise any alarm but was not responded?
* Was it simply a stage-managed thin?