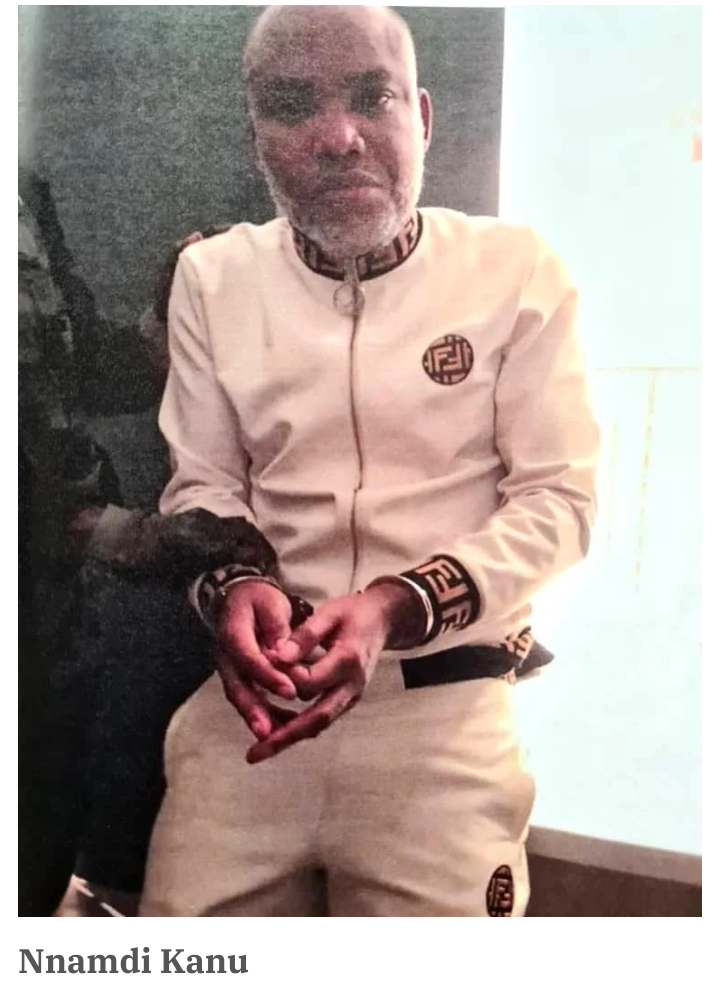 * Anti Kanu Igbo is a lost soul, a bastard…

* A catalyst providing oxygen to Biafra, Oduduwa, othe agitations in the South

* Call on the British government to interrogate the interception of a British citizen, IPOB leader Kanu in Kenya

* Nnamdi Kanu is not the problem of Nigeria, ethno-religious identity politics is

* As Northerners stand with Pantami, Gumi, Miyetti Allah, others, Ndigbo must stand with Kanu

* Ask why Nigeria insists that Biafra shouldn’t be self- governed?

The Bishop, Methodist Church Nigeria, Onitsha Diocese, Rt Rev. Biereonwu Livinus Onuagha, Tuesday, said that the detained leader of the Indigenous People of Biafra, IPOB, Mazi Nnamdi Kanu, might have exhibited youthful exuberance, but that he is representing 99.9 percent of the Igbo and the entity called Biafra.

This is just as lawyers from the South-East are mobilising in support of Ifeanyi Ejiofor, counsel to the Mazi Kanu.

Bishop Onuagha also said that Mazi Kanu is an asset not only to the Igbo but to entire Southern Nigeria, adding that any Igbo person openly criticizing him now is a lost soul, a bastard and a naive person and he has no apology for using such words.

Bishop Onuagha in a press statement, entitled, “My take on Nnamdi Kanu: Nnamdi Kanu is not the problem of Nigeria” and made available to newsmen in Onitsha said that as long as Northerners are still standing with Pantami, Gumi, Miyetti Allah and others, he will stand with Nnamdi Kanu.

Bishop Onuagha said that Nigeria is not working and can never work until something drastic is done about its lopsided structure, adding that what is happening in Nigeria is total injustice, calculated intimidation, sidelining and enslaving a group of people, adding that those that are benefiting from the systematic injustice will never allow the current system to be tampered with.

Bishop Onuagha’s statement read in part: “In the last few days, there have been mixed feelings in the nation of Nigeria.

“It is no longer news that Nnamdi Kanu has been arrested. Many people have their opinion on this and they are entitled to them. I am equally entitled to mine.

“Some people are rejoicing that Nnamdi Kanu has been arrested. Others are not happy because of that. The chase after Nnamdi Kanu is a misplaced priority.

“To me, any Igbo person openly criticizing Kanu now is a lost soul, a bastard and a naive person. No apology.

“Those Igbo rejoicing like Joe Igbokwe in Lagos is only being ignorant of the hand writing on the wall. Let me refer him to the Scripture if he reads his Bible:

“By the rivers of Babylon, there we sat down, and there we wept, when we remembered Zion. There on the poplars we hung our harps; for the wicked carried us away captivity, and required from us a song. How can we sing the Lord’s song in a strange land?”(Psalm 137: 1-4.)

“If I take a look at the apartheid policy in South Africa, the legend of our time- Daddy Nelson Mandela, he spent 27 years in prison to emancipate his people.

“He died in the struggle. Joe Igbokwe is only being selfish. How many of his investments are in Onitsha, Enugu, Awka, Abakaliki, Umuahia and Owerri? He is only making himself as a Tobias or Samballat.

“I listened to Senator Victor Umeh talk about the ideology of Nnamdi Kanu where he said Kanu may have spoken like a young man he is but there is truth in all he is saying.

“Can somebody tell me why Nigeria is insisting that Biafra should not be self governed? Is the Igbo man in the second agenda of this government?

“In a country dominated by ethno-religious identity politics, throwing your own under the bus is the biggest blunder anyone could commit. As long as the Northerners are still standing with Pantami, Gumi, Miyetti Allah, etcetera, I will stand with Nnamdi Kanu.

“Nnamdi Kanu may have his youthful exuberance but he is representing 99.9% of the Igbo and the entity called Biafra. This is no time to openly talk about his mistakes.

“Like every human being, he is not infallible. He has his Achilles’ heel and its attendant hubris. Even with his mistakes, Nnamdi Kanu is an asset not only to Ndigbo but to Southern Nigeria as a whole. His courage has earned my respect.

“He is the catalyst providing oxygen to all the agitations in the South today, be it Biafra or Oduduwa.

“The question is, the injustice and oppression that Kanu is fighting, are they real or imagined? Of course, even the blind can see them.

“You may not know the value of a mad man in your family until herds of other madmen invade your ancestral home.

“Nigeria is not working and can never work until something drastic is done about its lopsided structure. What is happening in Nigeria is total injustice, calculated intimidation, sidelining and enslaving a group of people.

“Make no mistake, those that are benefitting from the systematic injustice will never allow the current system to be tampered with.”

In another development, the Igbo Lawyers Association, ILA, has said it is mobilising other lawyers to work with Barr. Ifeanyi Ejiofor, counsel to the Leader of the Indigenous People of Biafra, IPOB, Mazi Nnamdi Kanu, to ensure he gets the best legal representation in his ongoing trial.

Kanu who was recently re-arrested by the Nigerian government is scheduled to be in court on July 26, 2021, for the continuation of his trial

Briefing the media in Aba, chairman of the Association, Chief Chuks Muomah, SAN, who was represented by Chief Ukpai Ukairo, condemned the illegal manner in which Kanu was intercepted and brought to Nigeria.

The association called on the British government to investigate the illegality to ascertain how the IPOB Leader was moved from Kenya to Nigeria.

The group stated that one of its major objectives is to fight and protect the justifiable course of the Igbo man to fairness, justice and equity in Nigeria, stressing that it will henceforth, interface with all pro-Igbo organizations including the World Igbo Congress, WIC, for the attainment of the objectives.

“We’re calling on the British government to interrogate the interception of a British citizen, Mazi Nnamdi Kanu in Kenya and the subsequent detention in Nigeria.

“We are doing this because we want the British government to ensure the reversal of the illegality of that interception.

“We are also giving notice that Igbo Lawyers Association is mobilizing lawyers from across the globe to put up the best defence available under municipal and international law in defence of the rights of Mazi Nnamdi Kanu.

“This is because we stand on the pedestal that there must be a fair trial within the prism of settled international guidelines to ensure justice. We’re already in touch with Barrister Ifeanyi Ejiofor and he’s aware.

“The Honourable Attorney General of the Federation used the word interception and not arrest because he knows that what happened cannot come under the definition of an arrest.

“An interception is a kidnap and abduction. Having intercepted him, brought him to court, what we are saying is that all tenets of justice must be observed,” the Association said.